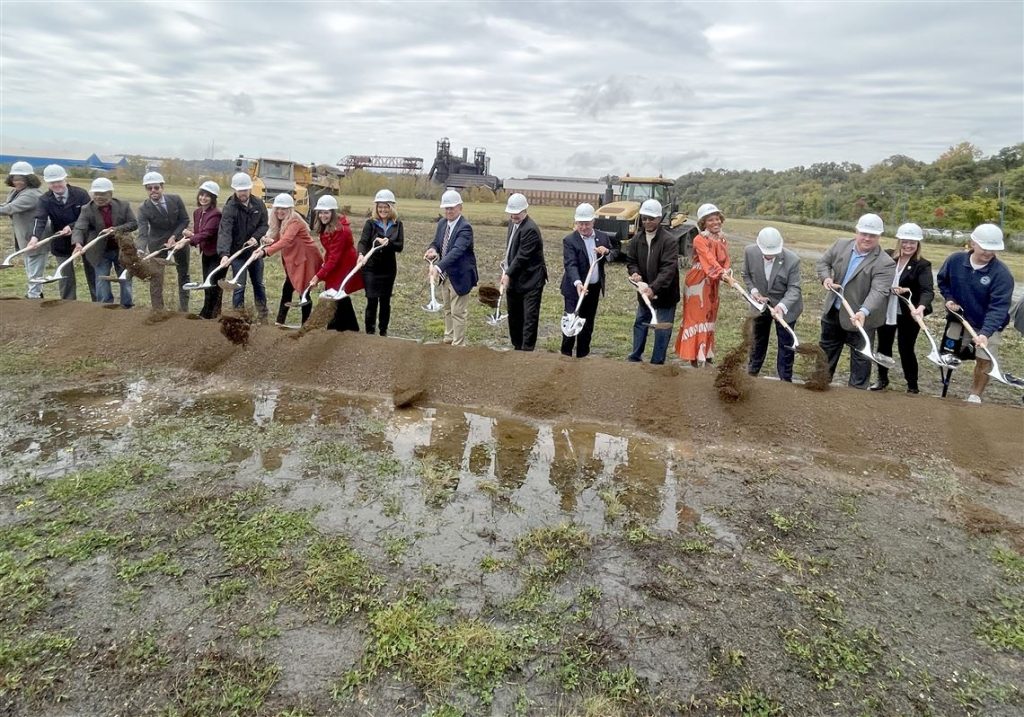 Forged in steel, the Mon Valley may soon become a hub for the big screen.

A film studio housing sound stages is one of two flex buildings being developed at the historic Carrie Furnaces property as part of its long-awaited revival.

Officials gathered Thursday at the sprawling site bordering Swissvale, Braddock and Rankin for a groundbreaking in advance of construction, which could start on both buildings sometime next spring.

Dawn Keezer, director of the Pittsburgh Film Office, said her goal is to turn the former brawny industrial site into a campus for the production of TV shows and movies. It has been dubbed the Film Furnace.

“We’re going to make this the center for the film industry,” she said.

The Regional Industrial Development Corporation of Southwestern Pennsylvania is overseeing the transformation of the site, which features 55 acres of developable land.

It plans to start with the construction of a 60,000-square-foot tech flex building next year, to be followed shortly thereafter by the work of the film studio.

The projects represent the first tangible pieces of development on the property, with the imposing Carrie Furnaces serving as a dramatic backdrop of its past — and perhaps as a prop for its future.

“This truly is a phoenix rising from the ashes,” said state Sen. Camera Bartolotta, R-Monongahela, who is co-chair of the Senate’s Film Industry Caucus and a film office board member.

Ms. Keezer said the type of film village envisioned at Carrie Furnaces will help the region to compete more effectively with states like New Jersey, Georgia and New York, which are building their own facilities.

“Today’s really an amazing day. It’s been years in the making. And we’re thrilled to be able to tie the history of our past with where we’re going in the future,” she said.

The region, Ms. Keezer noted, is on a roll in terms of film production.

Last year brought 11 projects, with another 10 scheduled for this year. They represent about $300 million in investment and 10,000 jobs, she said.

The Pittsburgh Film Office has received $2.85 million in state redevelopment assistance capital grants and a $3 million federal grant to help with the construction.

Coupled with private investment, Ms. Keezer is confident the funding will be available by next spring to start work on the 60,000-square-foot film studio.

“We want it to be the go-to place for the film industry in southwestern Pennsylvania,” she said.

She ultimately hopes to create up to six sound stages on the property and attract other film-related offshoots like props, costumes, casting and special effects as well as restaurants, coffee shops and the like to serve the people working there.

“We see it as a real catalyst for the building and all the positive changes happening down here in this area,” she said.

Allegheny County Executive Rich Fitzgerald envisions the Carrie Furnaces complementing Hazelwood Green and other former mill sites in McKeesport and Duquesne that are being redeveloped.

Those facilities that “used to be such a production haven for steels and metals way back when are now going to be a haven for technology and film and IT and life sciences and all of the things Pittsburgh and the Pittsburgh region is becoming,” he said.

Before work can begin on either of the first two buildings, the RIDC will be installing roads, utilities and other infrastructure, President Don Smith said.

Including those costs, the first flex building development is expected to total about $20 million, he said. The film studio will cost “in the teens of millions.”

Mr. Smith doesn’t anticipate a problem attracting interest in the first building, which is being started without a signed tenant.

“I think there’s a lot of possibilities. We’re actually seeing probably some of the strongest industrial demand that we’ve seen certainly in my 14 years in the business. It ranges everywhere from R&D to light assembly to manufacturing.” he said.

U.S. Rep. Mike Doyle, D-Forest Hills, said the redevelopment of the site has been “a long time coming.” He said his grandfather worked at the Carrie Furnaces for 40 years.

In addition to helping with the $3 million in funding for the film studio, Mr. Doyle was instrumental in securing a federal grant to build a flyover ramp into the site that was crucial for its redevelopment.

“Like many of us here in the region, it’s made a lot of us sad to see this site sitting empty and being an economic burden on the surrounding communities when its redevelopment could bring new businesses and jobs to the area,” he said.

“So I’m very pleased that today we’re breaking ground on the first phase of this very important project.”

The RIDC believes the 55 acres of developable land could accommodate as much as 600,000 square feet of new construction. Another 11 acres are available west of the site for a potential future phase.

RIDC officials have an option to purchase land from the county’s redevelopment authority, which is the owner of the property.

The Carrie Furnaces tower 92 feet over the Monongahela River and were once part of the U.S. Steel Homestead Works. The site, which dates back to 1884, has been designated as a National Historic Landmark.