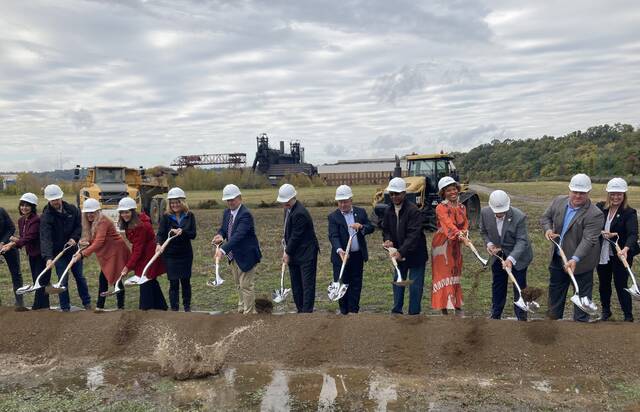 The Carrie Blast Furnaces, a National Historic Landmark, on July 10, 2019. Local Pittsburgh officials at a ceremonial ground breaking for the Carrie Blast Furnace site on Oct. 13, 2022.

Officials on Thursday announced that two, 60,000-square-foot buildings will be built on the historic Carrie Blast Furnaces site in Rankin.

The first is being marketed as a tech flex space and the other will be a film sound stage and production facility.

Roads and other infrastructure for the 55-acre site are starting construction this year. Carrie Blast Furnaces is a preserved brownfield site that was part of the Homestead Steel Works.

The site is being developed by the Regional Industrial Development Corp. Its president, Don Smith, said at a news conference the film building will be the first purpose-built soundstage in the Pittsburgh area. He said the two buildings are part of eight total plots that RIDC expects will eventually bring hundreds of jobs to Carrie Furnaces.

“This site represents economic progress for our region,” Smith said. “A site for jobs that will sustain families.”

Smith recognized U.S. Rep. Mike Doyle, D-Forest Hills, for helping to secure millions of dollars in funding for the site, including the initial federal dollars for a flyover bridge that made the site accessible.

“This has been a long time coming,” said Doyle, who added that his grandfather worked at Carrie Blast Furnace after immigrating from Ireland. “We have been working hard to put abandoned properties like this back into use again.”

The initial tech-flex building and its infrastructure will cost nearly $20 million, which includes a combination of federal budget appropriations and private grants and loans and equity provided by RIDC.

Allegheny County Executive Rich Fitzgerald called the site “hallowed ground” because of the steel industry’s’ role in building the country and winning wars.

“As the Mon Valley used to be used for the production of steel, now it will be for the growth of tech, life sciences and other industries,” Fitzgerald said.

He said the site is situated well for access, as it is located near the East Busway and will soon be getting a bike-and-pedestrian trail extension thanks to a $9.2 million allocation from Allegheny County.

Smith also expects the buildings will help boost the film industry, as two repurposed sound stages in the area have recently been taken offline.

“This will tie the history of our past with where we are going into the future,” Keezer said.

Ryan Deto is a Tribune-Review staff writer. You can contact Ryan by email at [email protected] or via Twitter .